Defeat Cancer ... Like I did twice!! by Barry Thomson 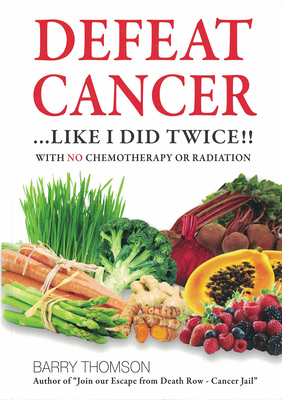 Defeat Cancer ... Like I did twice!! by Barry Thomson

Defeat Cancer....Like I did Twice!! With No Chemotherapy or Radiation
by Barry Thomson. Author of "Join Our Escape from Death Row - Cancer Jail"

This book continues the story of Barry Thomson's journey with cancer, and subsequent cancer-fighting experiences, and also provides a wealth of additional and valuable new cancer-fighting information he has obtained since publishing “Join Our Escape from Death Row – Cancer Jail” in late 2007.

In April 2003, Barry was diagnosed with, simultaneously, two of the deadliest melanomas. Despite surgery, Doctors felt certain that melanoma cells had escaped into his lymph system. Normal outcome of this is death within twelve months. Orthodox medicine could not help Barry so he and his wife found their own cure! Blood tests in November 2003 showed no melanoma. Doctors were completely stunned at this outcome — they had beaten melanoma, one of the deadliest of cancers!

"Natural therapies alone - I have never received chemotherapy or radiation treatment - saved me from terminal double melanoma, diagnosed in April 2003 and bowel cancer diagnosed in June 2008. I am cancer free today.”

“I have experienced an amazing ten year journey with cancer. I defeated two cancers which are normally very difficult to overcome. In late 2007, I self published my first book 'Join our escape from Death Row - Cancer Jail'. Subsequent testimonials told me it enabled numerous people to defeat their cancers.

“This book is my legacy. It is the culmination of ten years of narrow focus research to find ‘weapons’ from Mother Nature that will savagely attack cancer. The good news is that Mother Nature provides a great number of these. The technology of Mother Nature is far superior to the medicine of scientists.

“I offer this book as evidence to this truth - Barry Thomson."